Hybrid seeds let you grow disease-resistant plants that produce more fruit – what’s not to love? Well, there are some drawbacks to hybrid seeds (after all, nothing is perfect).

Of course, hybrid seeds have their place in gardening, and only you can decide if the tradeoff for hybrid seeds is worthwhile.

In this article we’ll take a closer look at what hybrid seeds are. We’ll also talk about the advantages and disadvantages of using them.

What Are Hybrid Seeds?

According to Wikipedia, hybrid seeds come from cross-pollinated plants.  This means that farmers and breeders specifically select two parent plants (a mother and a father plant) to create a desirable offspring plant.

Pollen from the father plant is used to pollinate the female plant. After cross pollination, the pollinated flowers on the mother plant will produce fruit.

The seeds from this fruit are a hybrid of the two parent plants. If a breeder repeats this process enough times, he will eventually find a suitable hybrid with large fruit.

Fruit size is not the only trait that a breeder cares about! Breeders can also cross pollinate plants to create or strengthen other desirable traits such as:

Breeders must choose parent plants carefully. However, choosing parents is not the end of their work!

Breeders must also ensure that only the pollen from the selected father plant is used to fertilize the female flower of the mother plant.  That way, there is a better chance of producing seeds that will grow into plants with the desired characteristics.

Note that I said chance – it is not guaranteed that the offspring seeds will always have the desired characteristics.

Before creating the desired seeds, growers may need to throw out lots of failed experimental crossings that have undesirable characteristics.  Just like clinical research to develop pharmaceuticals, success takes time and is not always guaranteed.

What Is An F1 Hybrid Seed?

An F1 hybrid seed is a first-generation hybrid (first filial generation). This means that the seeds came from the cross pollination of two parent plants from two different “pure” lines.

The “F” stands for “filial” which means relating to the son or daughter (offspring). The “1” stands for the first generation.

So, F1 is the first generation of offspring from cross pollination of two plants.

As you might guess, F2 is the second filial generation. An F2 hybrid seed comes from saving seed from the fruit on a plant grown from an F1 hybrid seed.

According to the University of California, it can take 7 or 8 years to produce a pure line. Only after that can you start cross pollinating to produce hybrids!

There are numerous advantages to using hybrid seeds in your garden:

One of the best things about hybrid seeds is their predictability, so we’ll start there.

Since all hybrid seeds in a packet have the same parent plants, they all have the same genes.  This means that they will all grow into similar (some would say uniform) plants.

With hybrid seeds, you won’t need to worry about undesirable characteristics, such as small or nonexistent fruit on your plants.

This also allows seed companies to describe the characteristics of plants with a good degree of certainty.  For instance, catalogs can describe the height of plants and the size of the fruit in advance, since all of the hybrid seeds will grow approximately the same way.

Just remember that environmental conditions can still affect how seeds grow.  If plants don’t get enough water, sunlight, or nutrients, they will not grow as large or produce as much as they could otherwise.

For many reasons, hybrid seeds are often easier and faster to grow than heirloom seeds.  For one thing, many hybrid plant varieties have been bred for disease resistance.

This means that plants grown from hybrid seeds are less likely to fall victim to bacterial, viral, or fungal infections that can slow their growth, reduce their yield, or kill them.

A good example of hybrid seeds are tomato plants that are resistant to late blight (which also caused the Irish Potato Famine in the 1800’s).

Hybrid seeds can also be bred to mature faster, grow taller, and require less water than heirloom plants.  Seed companies can even tell you the germination rate of their seeds, often with very good accuracy.

Again, remember that germination rates depend on proper conditions, such as:

If you over water or under water your seeds, deprive them of sunlight, or leave them too hot or too cold, they won’t germinate at the rates advertised in seed catalogs.

For more information, check out my article on over watering your seeds.

Hybrid seeds have been bred for vigor, meaning that some have resistance to disease, drought, or other environmental challenges.

Often, hybrid seeds are also bred to produce larger fruit and bigger yields, which can provide the same harvest with fewer plants grown in a smaller area.

This requires less work for farmers and gardeners. Fewer plants make it easier to sow seeds, care for plants, and harvest fruits and vegetables.

Finally, many fruits and vegetables have been bred to ship well, in order to satisfy consumers in distant markets with fresh produce.  For instance, some of the produce grown in California ends up on the east coast of the United States, in cities like New York, Boston, and Philadelphia.

The fruits and vegetables need to ship well in order to arrive fresh. Refrigerated transport helps, but breeding plants for good shipping is also a factor.

Hybrid seeds allow all of us to experience fresh foods that we could not otherwise taste – even out of season.

As with most things, hybrid seeds are not perfect – they do have their disadvantages.  We certainly won’t hold that against them, but we will list the disadvantages here (for informational purposes, and to stay balanced!)

Remember all the work that seed growers need to do in order to produce the hybrid seeds they want?  This means there is a lot of time spent on crossings that end up in the trash (or compost bin).

That is similar to the work pharmaceutical companies do to produce drugs that don’t work, or do not receive FDA approval.  In both cases, the company needs to make up for the cost of failed experiments by charging more money for the successful ones.

As a result, when you pay for hybrid seeds, you are paying for both the successful and unsuccessful experiments.  There is no way around this – after all, it’s called “research” for a reason.

When a hybrid seed is produced that has some desired characteristic, it often comes at the expense of another good trait.  For instance, seeds that grow into plants with larger fruit may also have fruit that has poor taste or texture.

This happens with animal breeding as well. For example, you can breed a larger dog, but it might end up having joint or heart problems due to its larger size.

Perhaps larger fruit does not taste as good because it contains more water. In effect, the extra water is “watering down” or diluting the flavor.

I have often found this to be the case with oranges. In my experience, the small oranges often have much more intense flavor than the large ones.

In addition to having more water, larger fruits may also have lower nutrient content.  The reason is that the plant has been bred to produce larger fruit – without necessarily acquiring the ability to absorb more nutrients from the soil.

Just because the plant has larger fruit does not mean it has larger roots. In that case, the plant might be unable provide enough nutrients to give the fruit the same nutritional value (pound for pound) as smaller fruit.

The same problem could stem from increased yields. If a plant produces twice as much fruit, but absorbs the same amount of nutrients from the soil, then each fruit may only have half the nutrients of a normal one.

This may be an oversimplification, but you get the idea.  Fruit from hybrid seeds may be less tasty and nutritious than fruit from heirloom seeds, since it is difficult to breed the “perfect” plant.

In fact, it is often impossible to breed a “perfect” plant (or any creature). This is just the way genetics works – we sacrifice one benefit in exchange for another.

For example: cheetahs are fast, but imagine how slow they would be if they had to carry around the protective shell of a turtle.  It’s the same way with breeding plants: you can’t have it all.

Hybrid Seeds Make It Difficult & Impractical To Save Seeds

This is possibly the biggest disadvantage to using hybrid seeds, which is why I saved it for last.  It is true that all of the hybrid seeds from a packet will grow into similar plants.

However, some of these plants will grow fruit that is seedless, meaning that there is no way to save the seeds and produce another generation.

Instead, you will need to buy hybrid seeds again the next year in order to grow your garden.  (The seed companies have really got you there!)

Let’s say that you plant hybrid seeds, and when the fruit appears, you’re in luck: it does end up having seeds.  Unfortunately, the next generation of plants grown from these new seeds is not guaranteed to be anything like the last one.

In some cases, the seeds will not germinate, and you won’t get any plants at all.

For more information, check out my article on heirloom seeds.

You can also check out this article from Seed Savers Exchange on the difference between heirloom and hybrid seeds.

Now you should have a good ideaof what hybrid seeds are and when you might want to use them.  You also know that there are certain drawbacks to using hybrid seeds.

Just remember that no seed is perfect, whether it is hybrid, heirloom, organic, or GMO.

I hope you found this article helpful – if so, please share it with someone else who can use this information.

If you are starting a garden, you can learn the basics on this page. 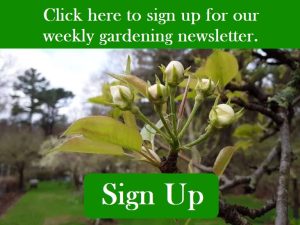